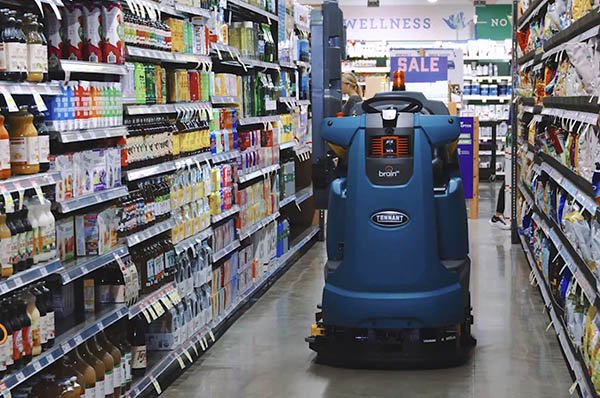 SAN DIEGO, CA – December 1, 2022  — Brain Corp, an artificial intelligence (AI) company creating transformative core technology in robotics, today announced, together with Tennant Company (Tennant), it has completed the deployment of over 40 autonomous scrubbers with Albert, part of the Ahold Delhaize company and one of the Czech Republic’s largest retail brands.

Albert Czech Republic initiated the testing of several autonomous cleaning robots last year in an effort to prioritize the cleanliness of its stores and the automation of its in-store processes. With the combination of best-in-class equipment from Tennant and the most advanced AI platform, BrainOS, Albert has fully automated the task of cleaning floors in its stores. In addition to the machines’ autonomous operation, BrainOS also provides a suite of fleet management tools, such as BrainOS Mobile, enabling managers to easily track machine operation and performance and ensure work is being carried out on schedule and to a consistently high level.

Tennant and Albert Czech Republic worked collaboratively to define the optimal robotic solutions, able to operate effectively and safely alongside employees while delivering the best cleaning performance tailored to Albert store surfaces and requirements. The partnership was initiated with a pilot program, which saw automated cleaning robots deployed in several stores throughout the Ahold Delhaize network in Europe.

“After an extensive phase of research, we elected to deploy BrainOS-powered Tennant autonomous scrubbers, which proved to be the most effective machines for operating efficiently and safely in our stores,” said Pavel Klemera, Operations Support Manager at Albert Czech Republic. “The roll out has been seamless and the advanced robotic scrubbers are easy for our team to operate, creating a high level of consistent and trackable cleaning, which ensures that our customers enjoy a comfortable and pleasant shopping experience.”

Tennant has been deploying autonomous mobile robotic cleaning solutions globally since 2017 and has seen a significant increase in deployments across central Europe year-on-year.

“We pride ourselves on producing automated machines that prioritize ease of use for the teams using them and in deploying these machines quickly and efficiently all across the world. With this partnership, we have seen the best of these, with a rapid and well-coordinated roll out and Albert’s instore teams welcoming the introduction of robotic co-workers able to take over the mundane and repetitive cleaning tasks.” said Bruno Ferraty, Strategic Account Manager EMEA at Tennant Company.

“Albert stores’ introduction of autonomous robots is a great example of how retailers are using technology to support their workforces and enhance in-store operations,” added Michel Spruijt, Chief Revenue Officer at Brain Corp.

Since the start of the national deployment in Albert stores, BrainOS®-powered robotic scrubbers have:

Founded in 1870, Tennant Company (TNC), headquartered in Minneapolis, Minnesota, is a world leader in designing, manufacturing and marketing solutions that empower customers to achieve quality cleaning performance, reduce their environmental impact and help create a cleaner, safer, healthier world. Its products include equipment for maintaining surfaces in industrial, commercial and outdoor environments; detergent-free and other sustainable cleaning technologies; cleaning tools and supplies; and coatings for protecting, repairing and upgrading surfaces. Tennant has manufacturing operations throughout the world and sells products directly in 15 countries and through distributors in more than 100 countries.