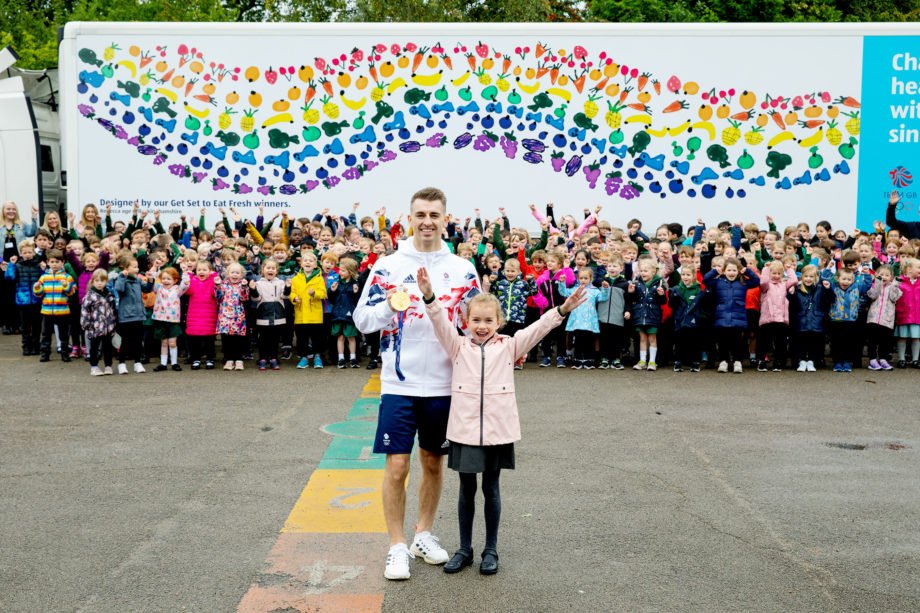 Aldi has revealed the winners of its nationwide competition with Team GB, which called on budding child artists to submit a design for its latest lorry.

Drawings by Isabella, aged five from Edinburgh, and Rebecca, aged six from Buckinghamshire, will now be spotted on motorways across the country.

An Aldi lorry with their winning designs parked up at their schools last week, and Team GB athletes Jack Carlin and Max Whitlock also paid them a visit to mark the occasion.

When visiting the schools, Max and Jack held a Q&A and took part in an assembly on what it’s like to be a Team GB athlete, their training regime and what they eat to stay healthy.

The supermarket has also rewarded the young artists with Aldi vouchers and exclusive Team GB goody bags. Their schools, Clifton Hall School in Edinburgh and Whitchurch Combined School in Buckinghamshire, will also receive £1,000 in Aldi vouchers each.

The Design a Lorry competition was launched as part of Aldi’s Get Set To Eat Fresh initiative that aims to inspire students aged five to 14 to cook and eat healthy, fresh food. Over the past five years, the programme has reached more than two million children across the UK.

Speaking about the judging process, triple Olympic champion Max Whitlock said: “It was great to see so many children across the country get involved in the competition.

“Selecting just two winners from a pool of more than 24,500 entries wasn’t easy, but Isabella and Rebecca’s designs really stood out to us. We loved the bright, colourful and beautifully drawn fruit and vegetables on both.”

Mary Dunn, Managing Director of Corporate Responsibility at Aldi, said: “The Design a Lorry competition is just one of the initiatives we’ve created to encourage young people to think about and engage with healthy eating.

“Our judges were really impressed with Isabella and Rebecca’s submissions, and we hope that winning this will inspire them to continue learning more about the benefits of healthy eating.

“Drivers across the country should keep an eye out for the lorries when they’re out and about!”

Tim Ellerton, Commercial Director at Team GB, said:“Throughout our partnership with Aldi on the Get Set to Eat Fresh programme they have continuously created new and innovative ideas to engage and inspire young people around the topic of eating fresh and healthy food. This was yet another fun opportunity for school pupils to see their creativity rewarded and for their schools to benefit also.”

The Get Set to Eat Fresh programme also offers a series of teaching resources, which can be used to educate children and their families about eating well, the skills they need to cook for themselves and how fresh, healthy food powers Team GB’s champion athletes. These can be accessed at getseteatfresh.co.uk.

Anuga presents the top innovations of 2021