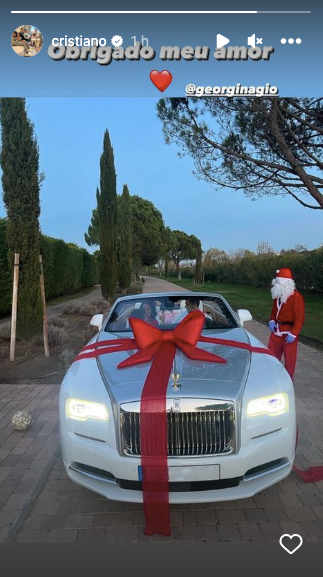 For Christmas, Georgina Rodriguez has spoiled her lover and father of their children. Indeed, Cristiano Ronaldo received a sublime luxury car estimated at a few thousand dollars

After the defeat, comes Christmas. On December 10, 2022, in the middle of the World Cup, Cristiano Ronaldo had to face a tragedy: Portugal was eliminated by Morocco one goal to 0. And if he had had trouble recovering as evidenced by a photo of CR7 crying in the locker room, the Internet users were also moved by this elimination: “Even if I celebrate the victory and the historic qualification of Morocco, it’s sad to see Cristiano Ronaldo leave his last World Cup in tears”, “I’m hyper happy for Morocco, but the tears of Cristiano Ronaldo breaks my heart”, “Full of emotions this World Cup, bravo to Morocco, Cristiano Ronaldo will probably never win the World Cup. A huge sadness. Thanks anyway to Cristiano Ronaldo for his wonderful career”, “Seeing Ronaldo cry hurts me a lot”, was read on Twitter. But obviously, a few days after the end of this competition, the 37-year-old striker has finally recovered … little by little.

A luxury car at an extraordinary price
And what better way to recover from this historic defeat than with a big gift? For the Christmas holidays, the famous Portuguese soccer player received a gift from his wife, at a priceless price: a brand new limited edition Rolls-Royce convertible. Crazy in love (and very generous), Georgina Rodriguez has spoiled his companion to the highest point. And he did not forget to thank her via an Instagram story.
Indeed, if not to pose with his family in front of a Christmas tree, one of the best players in history poses, with his wife and children, in his new luxury car: “Obrigado meu amor” (“Thank you my love”, ed.) he adds, with a heart. After having lived difficult moments in 2022, between the loss of their child at birth and the defeat of Portugal at the World Cup, everything seems to be going well for Cristiano and Georgina