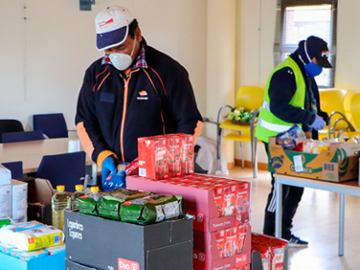 DIA creates a fund to double the donations of its franchisees.

The Company has a network of 1,600 franchisees distributed

This action is part of the DIAContribuuye2020 program

DIA’s franchisees are aware of the complicated situation that citizens are going through and want to give their support through donations to the most vulnerable groups as a result of the COVID-19 crisis. DIA’s franchise network extends throughout Spain. Many of them are in small towns where others do not reach, and they know very well the needs that the population currently has and the problems it is going through. The franchisees, from their stores, are making donations to different organizations and institutions and DIA wants to support these actions by doubling the amount of the donation they make.

To this end, the company has created a fund within the DIAContribuye2020 program to respond to the donations of the franchisees, entrepreneurs with great economic impact in their areas as they are generators of employment and wealth.

“Our more than 1,600 franchisees are a reference point in their neighborhoods and towns, a true example of closeness and proximity. We want to support them in their work as active agents of their community, helping them to provide more food and basic goods to those who need it most. Thanks to their collaboration, we are identifying local entities that are doing a great job in assisting people affected by this crisis and we are making our “DIAContribuye2020” aid programme available to them,” explains Ricardo Álvarez, general director of DIA Spain.

For the moment, more than 70 DIA franchisees have already requested their participation in the initiative through donations of basic necessities or food vouchers for 31 towns in Andalusia, 12 in the Community of Madrid, 8 in Castilla la Mancha, 5 in Castilla y León, 5 in Melilla, 4 in Extremadura, 4 in Galicia, 2 in Aragon, 2 in the Community of Valencia, 1 in Asturias and 1 in Navarra. The associations proposed by the franchisees that meet the established requirements will receive the donation multiplied by two, the contribution of the franchisee and the contribution of the DIA Group.