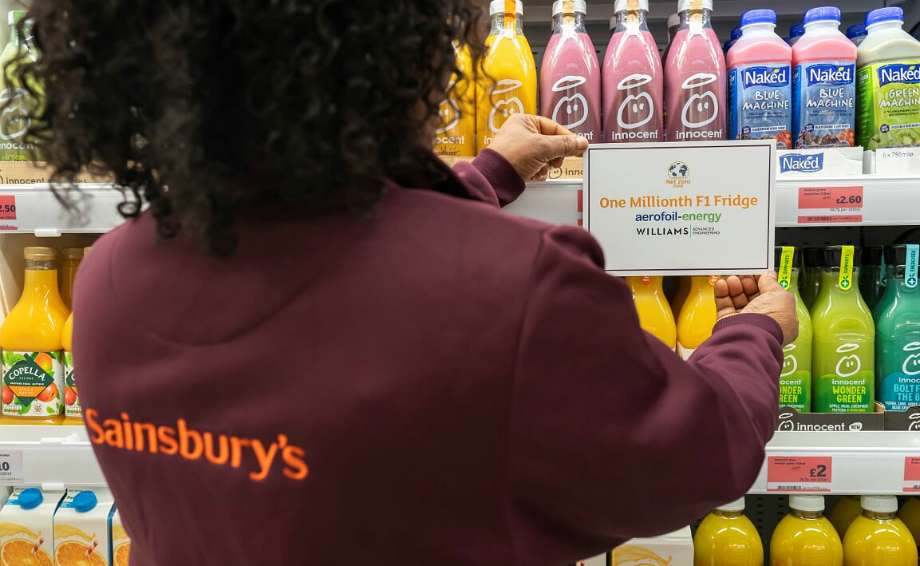 Today Sainsbury’s opens its new store in Battersea Park Station, where Aerofoil Energy and Williams Advanced Engineering have fitted their milestone one millionth Aerofoil in the UK

Sainsbury’s is fitting its 400,000th Aerofoil to fridges in its new Battersea Park Station store today, meaning all of its convenience stores and supermarkets are now fitted with the innovative energy saving technology.

The news follows Sainsbury’s announcement in January 2020 where it pledged to invest £1 billion over the next 20 years to become a Net Zero business in its own operation by 2040 – 10 years ahead of UK government legislation.

Pioneers of the innovative technology, Sainsbury’s was the first supermarket to install Aerofoils in 2017. After undertaking extensive research into the positive impact Aerofoil fitted fridges would have on energy reduction, Sainsbury’s made the decision to roll them out across convenience stores and supermarkets, and as a result has seen a 15% energy reduction from its fridges across the estate.

The technology has been created by Aerofoil Energy and Williams Advanced Engineering, a technology and engineering services business and part of the Williams F1 Group.
Initially created to divert air over and around race cars to allow them to maximise performance , in store it helps prevent cold air from leaving the cabinet, directing it back into the fridge. This saves energy, keeps aisles warmer and reduces food waste, by maintaining products at their optimal temperature.

The fitting of the one millionth Aerofoil in the UK in the Sainsbury’s Battersea Park Station store marks a huge milestone in cutting carbon emissions. Each year, Aerofoil equipped fridges in Sainsbury’s deliver carbon savings of 8,783 tonnes of CO2e

The retailer’s current carbon footprint is one million tonnes, which is a 35% absolute reduction in the last 15 years despite its space increasing by 46% over the same time frame. For the last six years Sainsbury’s has been awarded an ‘A’ grade listing for taking action on Climate Change by the CDP (Carbon Disclosure Report), the highest rating of any UK supermarket.

Dave Merefield, Carbon, Utilities and Engineering Manager at Sainsburys says: “We’re committed to becoming a Net Zero business by 2040 and have already begun to make headway by investing substantial time, research and money into different areas that can help us achieve this goal – including the fitting of the pioneering Aerofoil technology.

Since rolling out Aerofoils, we’ve seen a 15% reduction in energy created from fridges across our estate, and over the next few years we’ll continue innovating and investing in technology to help us combat climate change.”

Craig Wilson, MD at Williams Advanced Engineering says:
“We are delighted to be part of the millionth Aerofoil installation at Sainsbury’s; particularly as they were the first high street retailer to trial Aerofoils in 2017 and it is satisfying to see how this F1 inspired technology is supporting Sainsbury’s Net Zero 2040 commitment.”

Paul McAndrew, Founder and CEO of Aerofoil Energy says:
“Sainsbury’s endorsement of Aerofoils has established this unique product as the industry gold standard in energy saving technology. As one of the fastest-growing “green tech” companies in the UK, it’s great that Aerofoil Energy has been part of Sainsbury’s drive towards a more sustainable retail future.”

Ahold Delhaize provides update on Annual General Meeting due to Coronavirus outbreak; meeting will continue to be held on April 8, 2020

Pop-up Power: The Rise of Pop-up Shops and Events

Count customers this Christmas to keep them safe