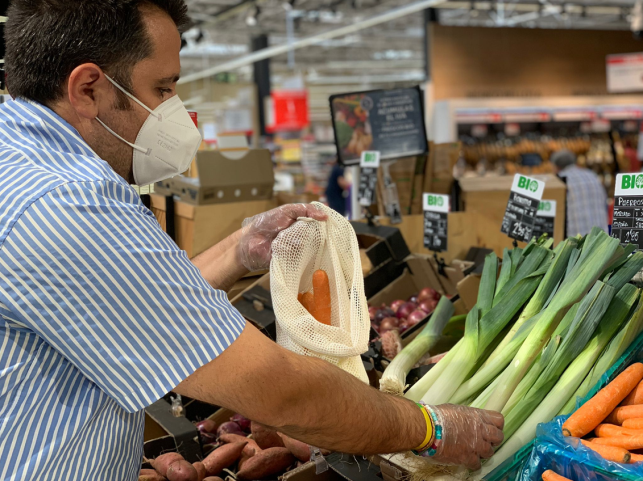 Over the last three years, Carrefour has managed to halve the amount of plastic it uses with all its fruit and vegetables. Doing so has established it as a company that is leading the fight to phase out plastics in Spain. Other products are now being packed using other materials, such as cardboard, netting and biodegradable packaging. In fact, over the course of this period, the retailer has cut out more than 1000 tonnes of plastic.

At Group level over the same period, Carrefour reduced its total use of plastic by 7154 tonnes. Furthermore, it wants to reduce its total packaging by 20,000 tonnes between now and 2025, 15,000 tonnes of which will be plastic.

For Carrefour, reducing the amount of waste it generates requires a collective approach involving industry, retailers and customers. Carrefour was the first company in Spain to allow its customers to bring their own containers to stores to purchase fresh produce, thus reducing the quantity of packaging required at counters.

This initiative was in addition to the raft of measures that the company has implemented to reduce its use of plastic. These include another innovative measure: providing customers with packs of 100% cotton bags that can be purchased and reused with future purchases. Furthermore, bags that are compostable and biodegradable are used in the greengrocer section; more than 80 different products are on sale loose in the dry fruit section, and olives and pickles are sold in glass jars. Similarly, customers have reusable cardboard boxes and a “receptacle” into which they can throw away plastic once they have made their purchases.

To supplement these measures, Carrefour has the ReciclaYa application available for iPhone and Android. Customers can use it to get information about recycling and learn how to properly separate and recycle the products listed on their cash receipt.

Furthermore, Carrefour ran the #MiPlayaSinPlásticos project with Procter & Gamble (P&G) over a five-year period. It was designed to raise people’s awareness of the impact that disposing of waste on beaches has and involved choosing a sandy area every year and then spending an entire day cleaning it. Since it was first launched 1700 kg of waste has been collected under the #MiPlayaSinPlásticos project.

Carrefour will continue promoting initiatives that reduce the sector’s environmental impact and contribute to its sustainable development.