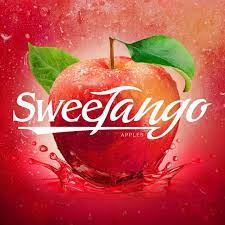 The apple queen of summer fruits, will take the spotlight of creative communication activities.

Among others, a “crunch competition” to be held in Germany, while in Italy SweeTango® debuts with its first TV spot.

Rüedtligen-Alchenflüh (CH), 12nd August 2022 – In the European pool created specifically for the positioning of SweeTango®, the five producing countries carry on with their investments to support the purchasing trend by the distribution channel and the growing number of consumers who appreciate the unbeatable qualities of this premium apple, such as its very fresh taste, crunch, and juiciness.

We will find it as always from the very first days of August in the fruit and vegetable department throughout Europe, and its summery taste will be palatable until the end of October.

First apple to be picked, SweeTango® is confirmed to be one of the most interesting varieties of apples. Since the introduction of the first plants in Europe in 2013, SweeTango® is now increasingly popular among consumers. A real summer star of its sector, an awarded fruit, a variety for which large European retailers continue to reserve a clear -premium positioning.

In Europe, SweeTango® is increasingly distributed, mainly in producing countries – Austria, Germany, Italy, Spain, Switzerland. The volumes produced in 2021 were very good overall, considering the recent start of the project; with a demand from retailers higher than the actual availability of the product, a clear sign of strong interest.

SweeTango® consumers are true apple-lovers who are passionate and refined in taste, looking for unprecedented taste novelties. This is why European producers have decided to dedicate their upcoming communication initiatives to them.

There will be several of them, starting as always with social campaigns, which will focus on the image of the fresh and crunchy summer apple #summerinanapple, with a creativity developed in Feed & Story for both Instagram and Facebook.

Also for this year the SweeTango® sales campaign will be additionally supported by articles and advertisements in the European sector press, as well as by an important engagement project through the official social channels of SweeTango® Europe – last season the total users who reached through campaigns on Facebook and Instagram channels were over 2 million.

But the most impactful idea of this season originates with Germany, where one of the most important producers is. It is a challenge: “Crunch the world record apple,” a competition which will run for several weeks and where the prices are 7 Apple Watches Series 7.

To take part in the competition, consumers bite into a SweeTango Apple and record the crunching sound. How loud it will be is irrelevant, what matters is the cracking sound itself.

Those who wish to participate will find a special label with all the directions on the apple packaging, where a QR-Code will direct them to the competition landing page. Promotional displays will also be located in stores to invite consumers to participate in the crunch competition.

„The competition will take place in Germany, Austria and Switzerland – said coordinator Wolfgang Kreiser from Red Apple Germany GmbH – the pronounced creativity of the packs as well as of the point-of-sale displays, in addition to the eye-catching message, will be the focus of an initiative that usually belongs to mainstream products. That is why we are confident that the originality of such a creative contest within the fruit and vegetable department can really make a difference on competitors“.

Also in Italy, SweeTango® will be at the center of an important communication project – for the first time the apple of summer will make its debut on TV, on the main national broadcasters.

“This is a crucial step for SweeTango® and for all of us producers who have believed in this project since 2013,” – said Andrea Fedrizzi, Marketing Director from Melinda sca. Debuting on TV really means entering the homes of our consumers. We believe that investing in communication is an operation that can ensure great returns in terms of positioning above all, as well as sales. We are optimistic, certain that we will still have ample room for growth”.

These days the five producing countries are organizing the harvest and distribution of SweeTango®, which in addition to being an apple with unprecedented taste characteristics, four years after its debut is recognized by the consumer as a captivating brand with a summer mood.

Among them, Spain is one of the main European producers. This is how Mercè Calvo , from Marketing Depatment of Nufri Group, describes the local situation: “Sweetango productions in Spain are still shy due to the youth of the plantation. Therefore, this year, the objective is to make the variety known to the sector and thus continue to evolve in the implementation of the variety in the domestic market, which we will surely have a spectacular reception thanks to the exceptional flavor, juiciness and crunchiness of the variety”.

Suitable for summer-autumn consumption, this apple is the first to ripen compared to other varieties, around early August, a week or two before Gala, placing itself in a perfect time period when the demand for fruits from fresh crop is high.

SweeTango® is an apple with a distinctive taste, to which is added the unique experience of biting. It is indeed crunchy and juicy. Thanks to its structural composition – the size of its cells is twice that of any other variety – it results in maximum crunchiness combined with the perfect blend of sweet and sour. This genetic peculiarity of SweeTango makes it one of the most valuable apples.

SweeTango® is a project.

I would like to emphasize that SweeTango® is not just an apple, it is a project,” – concludes Jurg Burri, the European variety manager of SweeTango®. Like all projects, it follows a detailed plan of action: there are scientific aspects, agronomic features, commercial projections, but it all revolves around a brand, this we will never forget. That’s why communication is so important to us.

We wanted to build a world around the apple, precisely because we believe that the consumer can become attached to the SweeTango® brand, a distinctive brand, recognizable in the fruit counter, with bright colors that refer to a fresh image, with a summer association. ‘Summer in an apple’ it is in fact the claim that covers the entire communication campaign, from the packaging to the deco of the point of sale, up to the merchandising”.

SweeTango® is the registered trademark that identifies the early variety of Minneiska apple developed by breeder David Bedford of the University of Minnesota in the United States.

Natural crossing of two different varieties, Honeycrisp and Zestar new premium variety was first introduced to the European market in Switzerland in summer 2015, through a European plant project which will continue in the future.